A Virtual Reality Dance Experience for Man and Machine

As only a limited number of visitors can use the VR at the same time, it cannot be guaranteed that all visitors can experience it. An appointment can be booked at the exhibition room during opening hours. We would like to point out that the VR experience is not suitable for visitors with limited mobility.

A place where art and technology fuse into completely new experiences, where the boundaries between stage and auditorium, performers and audience dissolve—Bauhaus artists Walter Gropius and Oskar Schlemmer, the creator of the Triadic Ballet, dreamed of this “total theater” a hundred years ago. Now the virtual reality production Das Totale Tanz Theater turns this vision into reality. The installation, conceived and realized under the auspices of the Interactive Media Foundation, transports guests to a 400-meter-high virtual reality dome. With VR glasses, visitors to the PalaisPopulaire become actors in a spectacular work of art that explores the relationship between humans and machines in the digital age.

Das Totale Tanz Theater is a huge stage space that stretches to infinite heights. Accompanied by a “dance machine,” the performers become part of an interactive choreography developed by American choreographer Richard Siegal. It is based on 2,500 individual movements of four real dancers, which have been digitized and can thus be put together again and again to form new movement sequences. In Das Totale Tanz Theater, constantly changing choreographies in virtual space emerge from the interaction of the movements, the interventions of the participants, and algorithms. Everyone can create their own interactive version of the production, or experience a version called Das Totale Tanz Theater 360 to the music of the Berlin band Einstürzende Neubauten as a 360-degree video. The experience is complete thanks to the concept album AUDIO.SPACE.MACHINE (concept & realistation: wittmann/zeitblom): the visitor becomes part of a unique, mechanistic-digital sound universe through the binaural design. The projects implemented by interdisciplinary teams continue the utopias of the Bauhaus in an absolutely contemporary, immersive dance and music experience.

“And last, but not the least, among the emblems of our time are the new potentials of technology and invention which we can use to create altogether new hypotheses and which can thus engender, or at least give promise of, the boldest fantasies,” Schlemmer explained in 1924 in his essay “Man and Art Figure,” which inspired Dirk Hoffmann’s futuristic design for costumes such as the “Technical Organism” in Das Totale Tanz Theater. In the stage design, two modern trends meet: Vladimir Tatlin’s Monument of the Third International, designed in 1920, a tower that dynamically spirals 400 meters into the air and is regarded as one of the most radical designs of the Russian avant-garde. And Walter Gropius’ design for the “total theater.” This building with an elliptical floor plan, which he designed in 1926–27 together with director Erwin Piscator, was intended to accommodate 2,000 spectators. Several stages could have been performed on at the same time. Movable partitions were intended to replace fixed installations; images or films would have been projected onto transparent surfaces.

This vision anticipates much of what is being experimented with in theater today. Neither Tatlin’s tower nor Gropius’ theater could be realized at that time, but now they are part of the digital architecture of “Das Totale Tanz Theater,” an extraordinary project that combines historical research, current state-of-the-art technology, and artistic visions of the future.

Das Totale Tanz Theater is a project by the Interactive Media Foundation and Filmtank, co-created by Artificial Rome. The project is supported by the "Fonds Bauhaus heute" of the Kulturstiftung des Bundes and the Medienboard Berlin-Brandenburg.

Audio.Space.Machine was created in cooperation between wittmann/zeitblom and the Interactive Media Foundation, the festival 100 jahre bauhaus as well as Deutschlandfunk, NDR and SWR.

The ‘making-of’ offers insights into how Das Totale Tanz Theater was created. 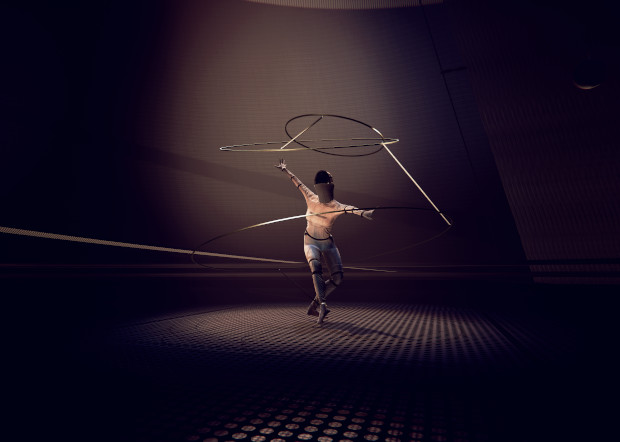